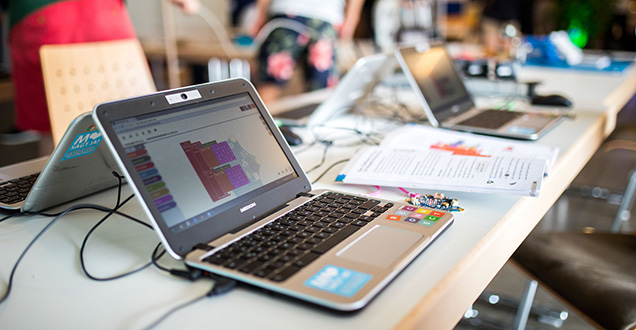 A catalyst for the Smart City of Heidelberg

Digital-Agentur GmbH Heidelberg is preparing the way for the Smart City. The company’s roles include identifying and evaluating trends, monitoring digital projects and establishing partnerships with stakeholders in digitalization.

Contacts and advisors, coordinators, instigators and project developers – Digital-Agentur Heidelberg GmbH combines everything under one roof. The task of the agency’s five-strong team led by managing director Sebastian Warkentin is to continue implementation of the Smart City concept and create conditions that will enable Heidelberg to establish itself as one of Germany’s pioneering digital cities.

A key principle here is that any use of new technologies should always serve to sustainably improve the lives of local people – within a city that is both smart and sensible.

To this end, Digital-Agentur Heidelberg GmbH operates on two levels:

On the application level, the digital agency has the role of a development company, working closely with municipal offices and the city’s public utility company (Stadtwerke Heidelberg) and advising on technological issues. Two examples: In collaboration with Stadtwerke Heidelberg, Digital-Agentur Heidelberg GmbH has been promoting the monitoring of energy networks through wireless technology. Sensors are now providing initial information about free parking spaces in the city, for example. In future, sensors will also detect when glass containers are full. The digital agency is also working with City Hall to set up “data lakes”. These will hold all the data collected from individual city offices and make it available across all departments.

The second key area of operation of Digital-Agentur Heidelberg GmbH is in developing partnerships. In addition to collaborations with the city administration, the city’s public utility company, local people and local business, the agency also partners technology companies geared to development of the Smart City. For many of these companies, Heidelberg offers an attractive environment as a business location. The goal is to establish a digital scene in Heidelberg and mainstream the “smart sensible city” concept in all areas of life.

Digital-Agentur Heidelberg GmbH is funded in equal measure by the city administration and by Stadtwerke Heidelberg. Currently housed in the offices of the Stadtwerke, the company will relocate in early 2019 to the new Heidelberg Innovation Park (HIP) on the former Patton Barracks site in the Kirchheim district.