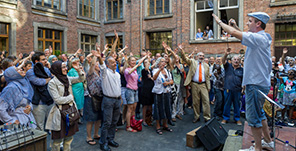 Heidelberg: open to the world
Heidelberg is a cosmopolitan city and has a real culture of welcome and acceptance. Even though the city’s population is becoming more diverse all the time, people feel at home here.
read more about integration in Heidelberg 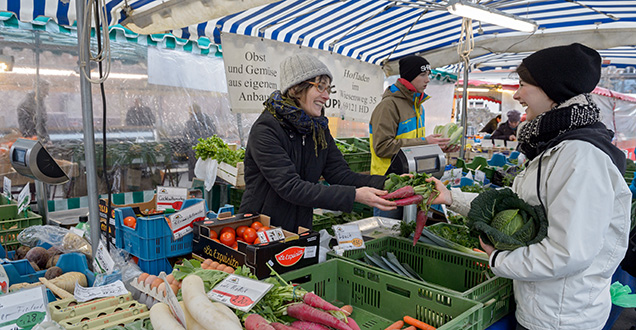 Feeling at home in Heidelberg

Some 160,000 people live in Heidelberg – including many families and academics who are attracted in particular by the university city’s excellent childcare and educational facilities. This is a highly international “city of knowledge“, with some 56,000 inhabitants originating from around 180 different countries. An impressive 98 per cent of people in Heidelberg say they feel at home in the city. Heidelberg is a city with a caring face – a city in which many inhabitants are involved in voluntary social work. Heidelberg is a city in which, according to the latest report, the risk of poverty, at 7.7 per cent, is half the national average. The city authorities have taken a wide range of measures aimed at ensuring that as many people as possible are able to participate in the life of the community.

Cultural variety and equality of opportunity

Heidelberg’s policy is to strengthen these close ties that people feel with their city – and this is helped by the wide range of information available and the many options for participating in the life of the community. The Council for Migrants, the Youth Council, the Advisory Committee for the Disabled – not to mention the tradition of keeping its citizens informed through an informative, detailed and easily-to-understand list of planned projects – ensure that the various different interest groups can bring their influence to bear on municipal politics. The 11.8 million visitors to Heidelberg every year also benefit from the cosmopolitan and welcoming atmosphere in the city.

One of Heidelberg’s attractions is that it has a particularly large proportion of people with a high degree of creative and entrepreneurial potential – and the city has an Officer for Cultural and Creative Affairs who acts as a contact person and encourages their activities.

Heidelberg is a safe city

More than 90 percent of Heidelberg’s population feels safe in their neighborhood – according to the findings of a representative citizens’ survey on the public safety situation. In order to keep it that way, the city administration, the police and the emergency services cooperate closely on civil protection. In addition, in February 2018 the State of Baden-Württemberg and the City of Heidelberg agreed to set up a partnership called "Sicher in Heidelberg” [Safe in Heidelberg], which had already achieved impressive positive results. The non-profit association Sicheres Heidelberg [Safe Heidelberg] encourages and supports measures and projects concerning crime prevention, victim protection and civil courage in Heidelberg – a current example of which is the Neighborhood Watch project. Since 2018, the city administration has been using the free NINA app for hazard warnings and giving rapid and reliable information and useful advice.