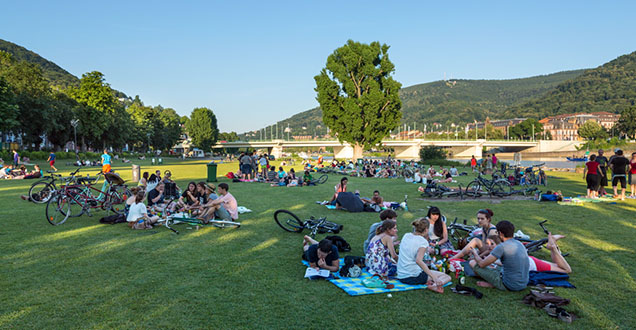 Key indicators at a glance

Heidelberg has approximately 160,000 inhabitants and is a young city in terms of its population’s age structure. Roughly 39 per cent of its inhabitants are younger than 30, while 16 percent are over 65. The proportion of foreign inhabitants is 21 per cent, which gives Heidelberg an international and cosmopolitan character. 41 per cent of the residents who are classed as employed workers (i.e. subject to social insurance contributions) are university graduates.

117,500 jobs. Heidelberg provides jobs for some 117,500 people, of whom 87 per cent work in the service sector. 70 per cent of the 89,500 in the employed-worker category are in knowledge-intensive services. The university, including the university hospital, is Heidelberg‘s biggest employer, with approximately 14,500 full-time employees.

39,000 students. The five universities in Heidelberg are attended by approximately 39,000 students, roughly 31,000 of whom study at Ruprecht-Karl University. Internationally renowned research bodies, such as the European Molecular Biology Laboratory (EMBL), the German Cancer Research Center (DKFZ) and four Max Planck Institutes, are based in Heidelberg.

11.9 million visitors. Heidelberg is a tourist destination for roughly 11.9 million visitors every year. It is located at the point at which the river Neckar leaves the Odenwald forest and enters the Rhine plain. The city is 50 miles south of Frankfurt and 75 miles northwest of Stuttgart, the state capital. Alongside Mannheim and Ludwigshafen, Heidelberg is one of the three regional centers in the Rhine-Neckar Metropolitan Region.

70 per cent green. Heidelberg covers an area of roughly 40 square miles, of which only 30 per cent is built up. Thanks to its combination of attractive countryside, favorable climate and urban lifestyle, Heidelberg enjoys one of the highest levels of leisure value in Germany.