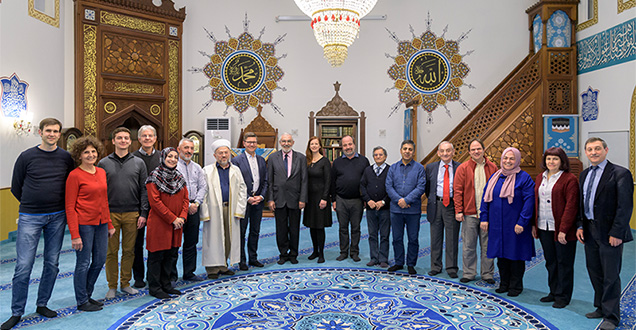 On behalf of the City of Heidelberg, deputy mayor Wolfgang Erichson has set up a very successful “Interfaith Dialogue” that gives all of the different religions in Heidelberg the chance to talk and find common ground between them. Its members include both of the main Christian churches (Evangelical and Catholic), the Jewish community, the Turkish-Islamic Cultural Center, and the Heidelberg Baha’i Spiritual Assembly. Since 2016 the „Verein für Muslime" in Heidelberg became involved in the Interfaith Dialog.

Since its founding on July 4th 2008 the Evangelical and Catholic deans, Dr. Marlene Schwöbel-Hug und Dr. Joachim Dauer, remarkably influenced the development of the Dialog. Both of them resigned from office. Their followers are Dr. Christof Ellsiepen for the Evangelical church and Alexander Czech for the Catholic church as well as the new director of Heidelbergs "Stadtkirche", priest Johannes Brandt.

Meeting, sharing, and working together